Presentation of the work:
Liquid Souls – The personal mystagogy of a painter and her viewers

By Panagiotis Agapitos
University of Cyprus

When viewers first look at Elena Kouma’s latest work, under the general title of ‘Liquid Souls’, they might feel a little puzzled as they stand before the black and white canvases which move between the iconic and aniconic. However, a second look invites them to explore the meticulous technique behind each painting. With very fine brushwork and exceptional precision the image that is created is of a calm inner pulse which flows from the line of the brushstroke. 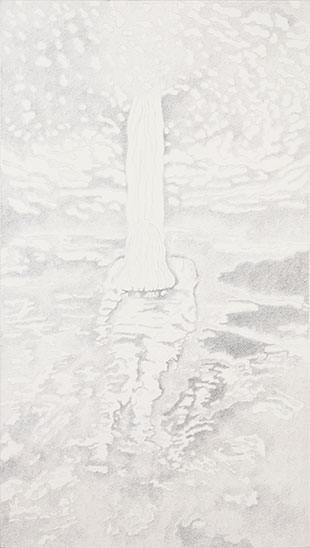 Generally, in this series of works by Elena, the line is the starting point of the work in each painting. Two kinds of imagery dominate the paintings. One is more ‘iconic’: for example, the female figure moving towards a point of light or framed at the top of a pyramid of light – a kind of mystagogical ritual, a ceremony of purification in a movement from bottom to top, which the viewers here perceive as conventionally formulated spatial concepts, as the top in one painting appears as the bottom in another. The second type is more ‘abstractive’, where a white and a black figure coexist, with the second being always fainter and more linear than the first: for example, the painting with the two full body figures lying on top of a kind of calm grey whirlpool. This group of works in particular exudes a specific mental state, a kind of hovering in mid-air. The two figures are in the painting together, but are separate iconic entities, giving rise to the question: are they coming together or separating, moving towards or away from each other?
The viewers immediately see two themes very distinctly. The first is the absence of the colours of the solar spectrum and the exclusive use of white and black and the various shades of grey obtained by mixing the two colours. If we consider the importance of colour in the comprehension of ‘reality’, its absence also denotes the role it plays in preventing an exploration of the spiritual dimension of a work of art, as it is able to lead the viewers (by association through the images on the mind) to a material dimension – perhaps indeed to a materialistic approach to the work. This material and/or materialistic dimension is cancelled by the ‘blurred’ structure where broadly circular or straight linear trends prevail, and in which clearly delineated shapes rarely appear.

The second theme is precisely these linear trends which are expressed in the form of wavy bands containing specks of white or grey light. The wavy bands convey the feeling of the liquid element in which the figures are suspended. The fact that the element concerned is water is indicated not so much by the general title ‘Liquid Souls’, as by the artist herself in one of her paintings in which she discreetly incorporates a colour photograph: to the right above the faint greyish figure with outstretched hand, in a closed circle a young woman can be seen stretching her hand down and left into the shallow waters of a rocky beach. The shadows of her body and hand appear in the gentle ripples of the calm sea, the broad stones are outlined by the movement of the water in the light. Thus, the liquid element of a distant reality which is frozen in the memory of a photograph, now takes on the ‘abstractive’ role of the cohesive vector of the figures.

It is evident that the paintings forming Elena Kouma’s ‘Liquid Souls’ are given meaning by a philosophical approach with an introspective focus. The work examines the human condition from which the image seen by the viewers is also clearly derived. The paintings project the feeling of a personal quest not as emotional anxiety but as a mental state, with the ultimate aim of escape and redemption from matter as a bond. Consequently, the black and white figures could be read as the body and soul which respectively represent the momentarily ephemeral and continuous evolution. To a large extent the paintings transfigure the painter’s inner feelings and the outer feelings of her spectators into something more deeply true. Hence, they invite us, using as mediators the black and white colours, the liquid element and the human figures, to release our ephemeral feelings from the closed dimension of solid matter as ‘false’ and to transfer them, through a personal mystagogy, as ‘real’ to the open dimension of our liquid souls.< 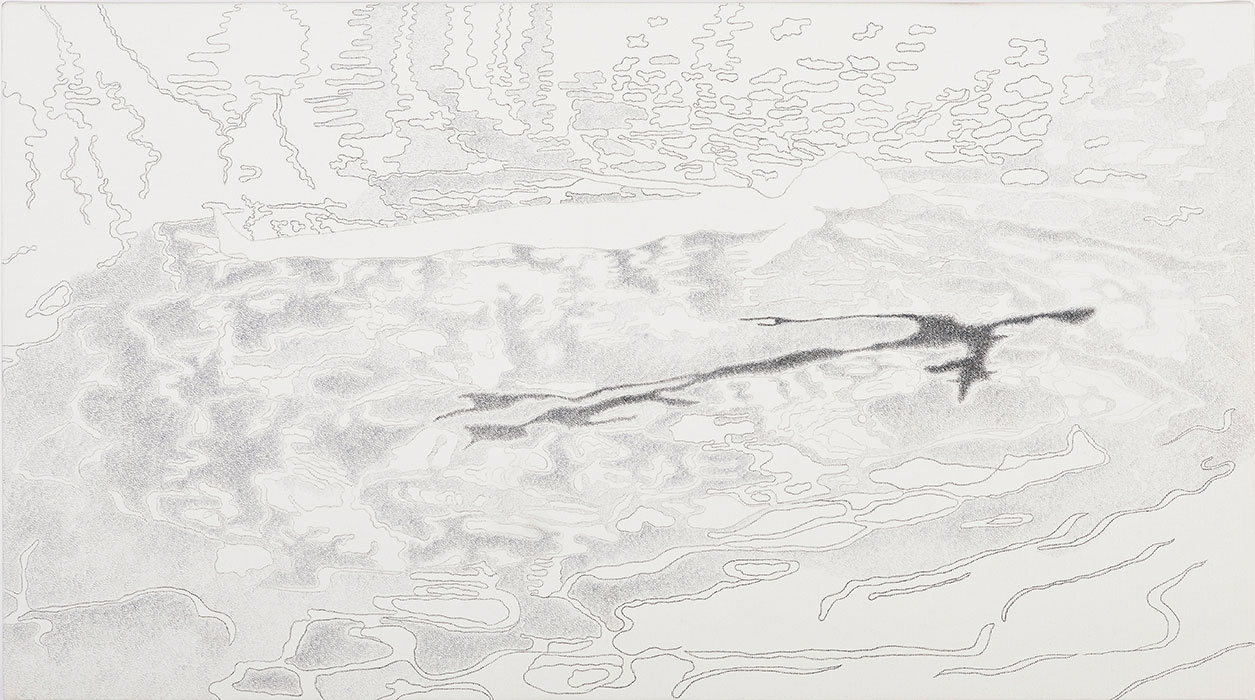