Presentation of the work ‘’Heliogony’’

Elena Kouma, Heliogony: the sensuality of matter, the spirituality of creation, and the artwork
as a window and as a screen to the view of the world.

In Elena Kouma’s previous group of works under the overall title Panspermia, (2003-2004) a world of eroticism, sensuality, as well as spiritual exaltation unfolded, with the pomegranate at its epicentre. Her latest work, entitled Heliogony, develops along parallel structures and formalist parameters, and it explores equivalent concepts, as well as states of materiality and spirituality. At the same time, however, it proceeds further and is differentiated in some aspects, from her earlier creation. 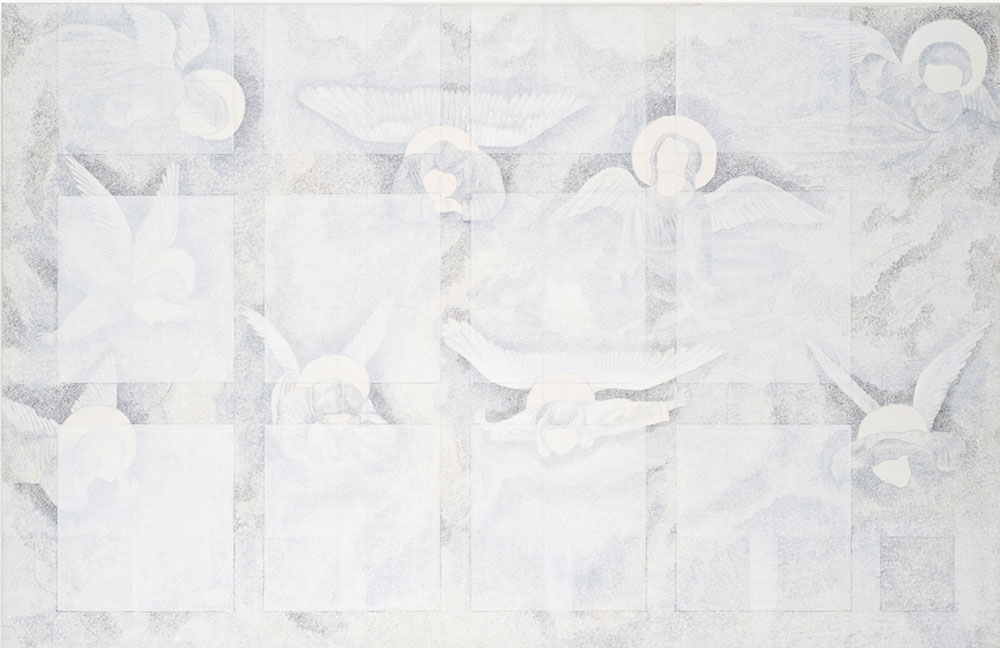 In the present paintings, the pomegranate has been replaced by wheat, and the passionate red Colour has been displaced by an ecstatic golden yellow. In some pictures, seeds of wheat emerge from the soil, toward the light, energy, fecundation and abundance. In others, orgiastic efflorescence and fruit bearing occupy the painterly surface, as a hymn to the miracle of gestation and propagation, thanks to the life – giving energy of the sun, which – in Kouma’s personal mythology – eventually leads to the sublimation and the spiritualization of the material world. The golden – yellow universe that has been set up, simultaneously encloses the sensuality of material (re)creation, along with the otherworldly spirituality of the gold colour-as-light of the Christian (especially, Byzantine) art.

The reference to this tradition is reinforced by the presence of angel figures. In one case, the source of the image is a wall painting in the Hagia Sophia church in Ohrid, titled Procession of Angels 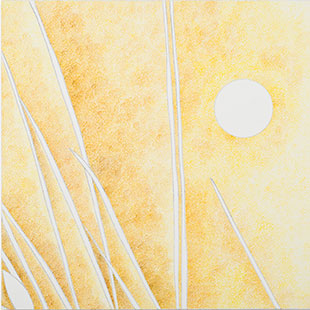 (1037-56). In all other instances, however, the figures derive from Giotto di Bondone’s Lamentation for the Dead Christ, one of the scenes of the fresco decoration – thematic cycles on the life of Christ and of the Virgin – at the Scrovegni Chapel in Padua, from the early 14th century. In the Lamentation, Giotto has organized the picture in two main parts – the earthly and the heavenly realms. In the first, the figures of the mourners constitute a wonderfully balanced composition, organized in a logical sequence of postures and gestures, kinaesthetically related to each other, thanks to subtle differences among them. As a result, the pain and the grief are rendered in heart-wrenching yet mutely dignified manner. On the contrary, the small angel figures in the upper part,due to the absence of a logical arrangement, appear in a state of amok and disharmony. It is these figures that Kouma has appropriated, rendering them either in a crowd or in isolation, at places, in mourning, and elsewhere, as symbols of exaltation, spirituality and freedom. They participate in the unfolding processes, and they eulogise the event of creation, and the progress toward the light – toward sublimation and apotheosis, the union of the material with the spiritual.

Some technical and formal elements in Kouma’s present works, (re)explore certain issues on the ‘’ nature ‘’ of representation in art, as well as on the artwork as a ‘’framework’’ or a surface for viewing. In simiral fashion to the Panspermia paintings, in the present compositions she has used pencils for the main outlines, while the largest part of the picture is produced with countless, small brushstrokes (in acrilyc), the result of a delicate, painstaking and time-consuming process..They often allude to carefully craffed embroideries, as if they are contemporary versions of a centuries-long, mostly by women, tradition of craftsmanship. This tradition, which in the post-Renaissance are existed along ‘’high’’ art, constituted – albeit unwittingly – a counterpoint to the illusionistic character of the latter (something that was violently overturned by the advent of modernism). This popular creation, with the (unconscious) emphasis on the flatness of the pictorial or decorative surface, announced the – fully conscious – corresponding emphasis within modern art. The latter renegotiated subversively the Renaissance and post-Renaissance approach to the two-dimensional image as a ‘’window to’’ or as a ‘’mirror of ‘’ the world.

The most important cases at the start of that tradition, are perhaps the aforementioned picture Cycles by Giotto at the Scrovegni Chapel. In one of her present paintings, Kouma reproduces in its entirety the upper part of the Lamentation for the Dead Christ, having covered the composition with series of semi-transparent, square surfaces, among which the ‘’openings’’ appear as immaterial ‘’frames’’, delimiting the squares. We have, therefore, an interesting reversal of the arrangement at the Scrovegni Chapel, where the narrative scenes-‘’windows’’ are defined by decorative (painted) ‘’frames’’. In Kouma’s works, the alternation between the opening- ‘’window’’ and the semi-trasparent ‘’screen’’, while it does not seriously obstruct the viewing of the picture, it nevertheless constantly makes the viewer conscious of the artwork’s optical perception, thus keeping him or her from fully abandoning one’s self to the illusionistic nature of representation.

The compositional and thematic integration of the ‘’opening’’ – ‘’screen’’ alternation is also encountered in some of her other recent works, usually in the form of the circle, thus summing up, one might say, the concerns and aims of the artist, as well as the notions with which she has imbued her works: the very act of viewing and of the perception of the picture; the reference to an in-out duality ( the two viepoints/sides of ‘’things’’ ); the schematic-symbolic rendering of the seed as the source of life, and of the sun as source of energy. Finally, it constitutes the focal point for the consummation of creation, where ecstasy is reached as the climax of exaltation, and where matter is sublimated and spiritualized – a process which, for Kouma, is at the epicentre of art.