Presentation of the work ‘’Panspermia’’ 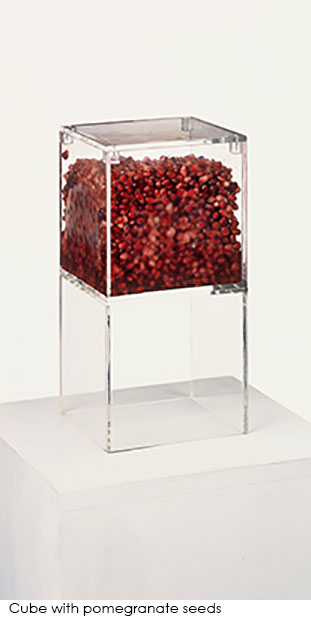 In the centre of the space where the latest works by Elena Kouma, under the title Panspermia, is exhibited, there is a large Plexiglas cube, filled with pomegranate seeds ["Cube with pomegranate seeds"].This work constitutes the most literal and tangible manifestation of the materials, the subject matter and the technique of the current group of works. The whole unit has been constructed as a journey into the inside of a pomegranate, as a plunge into the crumb and the juices of the fruit.
The technical negotiation in these works tends to make the case for the existence of a specifically feminine [female?] formal treatment and outlook in art. The delicately constructed surfaces 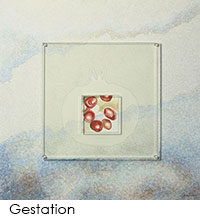 create a universe of horizontal, ‘’feminine’’ co-existence and co-dependence (unlike the ‘’masculine’’ pyramidal hierarchy). Soft needlework embroiders an elaborate fabric, a feminine universe, in which primordial energy is transubstantiated into shape, light and colour, and where an erotic and fecund act is accomplished.
The use of Plexiglas, as much transparent as it is hard (possible allusion to the simultaneous softness and hardness of female ‘’nature’’), allows – both formally as well as symbolically – focusing on the details: the large surfaces unfold like the inside a pomegranate’s skin, even the inside of its seed, as if observed under a magnifying glass.
The viewer finds himself in the insides of the fruit, of the seed, and he floats in its juices: in the blue vastness of the sky and of the water, in the whiteness of clouds and of sperm,in the redness of passion, of Eros, of the pomegranate ["Gestation"].
These surfaces, abstract as much as symbolic, decorative as much as substantial, constitute a development from the artist’s older works: they pre-existed as human crowds, as homogeneous seas of heads, rendered space in a linear and schematic fashion wavy lines for the hair, dark dots (like seeds in the crumb) for the eyes ["Without title"]
In the lates works, the crowd of human heads has been transformed into vast linear seascapes; but they remain present in snapshot references, arranged in squares, like windows that allow glimpses to the outside world, from the inside of the seed-fruit ["Gazing"]. 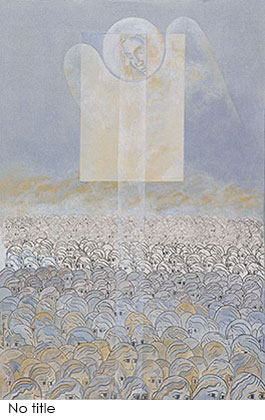 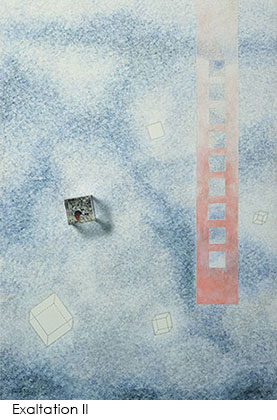 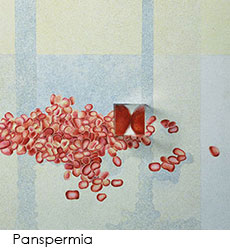 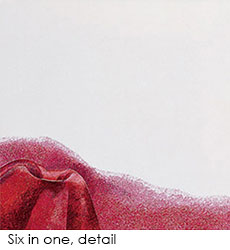 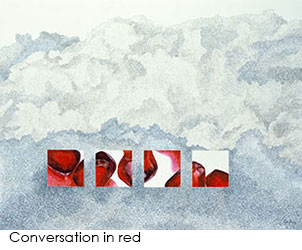