Presentation of the work "...and there was light"

There is a beginning from which everything starts. For Elena, the first cause, pure conscious- ness and prime energy, is expressed as white light. Everything begins from this shapeless white light and ends in the manifestation, the revelation of this entire wonderful world which surrounds us and in which we exist and move, acting out our part. In these works, Elena begins from the white unmanifested space, moves on to linear shapes which are the beginning of manifestation and ends in colours and shape of the manifested material universe. For her, this is a journey in the ceaseless making and remaking. Yet, within each material form, hidden deep inside, like a seed in the soil waiting to fruit, a sparkle of light. Her inspiration and the unity of her work begin here.
Letting herself, as she says, sink in the grandeur of Creation, she begins a purely personal approach to things: behind each manifested shape and form, she sees the incessant form of energy which unifies the universe. Shall we call it “ water elements”? Shall we call it “the love element”? In her works you will observe water, in a way, from its source – and then, that self same water comes with all its essence and energy, constituting and retaining manifested forms, but without being lost in them, it permeates and supports them. A fundamental support is the triune existence expressed in the form of a geometric shape and everything hands from it in water.
In the Unrevealed, white is defined from the Line. White exists in the energy and in the fleshy world this concentrated energy. There is a perpetual relation from above to below and from below to the above. One sees in these works – that are not only inspired but also very sensitive – a world filled with thoughts, this world below caught up in its daily routine – which seems predestined for all – a destiny, a shared agony – a world that feels isolated, forgetful of the fact that there is life – giving care and heeding and prodection from above and from everywhere. There are those who remember next to those that oblivion has embraced, and there are all alike, but because they are enlightened by Memory their world is different as the white light is diffused much easier by them. What a difference this light makes! A totally different world. I think we get the message… 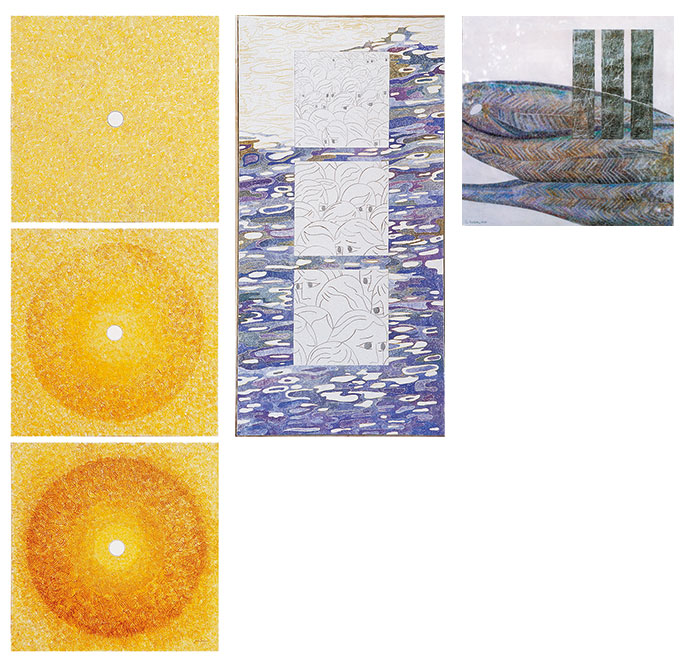